Bridges, the Canadian source for eye gaze technology, is pleased to announce the arrival of the portable, affordable eye gaze systems, The Key and The Comm.

Both the Key and the Comm are powered by a full Windows 8 tablet and USB connected eye gaze system.

The Key is designed for affordable alternative access while the Comm is an eye controlled face-to-face communication tool.
Read More

MEville to WEville has just been reintroduced as a complete in-the-box literacy solution for students with significant disabilities, and now there are two options to chose from;  one from Don Johnston and one from Ablenet. [caption id="attachment_1265" align="aligncenter" width="300"] QuickTalker 7 from Ablenet[/caption] If it’s for a new DD or MID classroom where your equipping them from scratch, the devices in the Ablenet package would probably be really appreciated by any teacher.  Open the box and you’re ready to go! On the other hand the DJ version might be particularly attractive to a teacher working with older students.  There are still the six Bookworm adapted literature books in the DJ version too.  With their lively pictures and fun stories, they’re attractive and engaging self-selected reading for students of a wide age range. [caption id="attachment_1270" align="alignleft" width="155"] Additional Start to Finish books in DJI's ME2WE package.[/caption] But in the DJ version you’ve got an additional 5 sets of Start to Finish Literacy Starters  – that’s 15 more books!  And like all Start to Finish Literacy Starter packages they include a switch accessible computer version with recorded narration and tonnes of useful resources for teachers.  There are also 30 Systematic Sequential Phonics Lessons to get students making words. Whichever MEville to WEville package you chose, your students will be served well with a proven, research driven literacy curriculum for students with significant disabilities. In a research study, led by Dr. Karen Erickson at the University of North Carolina, students between the ages 8 to 14 (all with moderate to severe/profound intellectual impairments) improved generalized development in reading and writing skills by an average of 40% (Cohen’s d=.44) after completing 40 instructor-delivered lessons from the MEville to WEville with Literacy Starters Program. And the research results showed that students were able to generalize their skills, too. To see the full results visit http://donjohnston.com/metowe/ and click on the Research Tab.

[to see the latest in accessories to help you with iPad switch users  -- mounting, cases, storage, charging, and training -- visit the Bridges' iPad page]

In general, I found they are really good for accessing all the menus and desktop icons.  If a program already has scanning built in- it runs great. If the program does not have scanning built in, it will look for the hot spots and scan groups or single items, depending on the settings you choose.

One nice feature in the new iOS 7 is that there is an available on screen scanning menu. While using switch control, when a user selects an item they will encounter a pop-up menu that contains a variety of advanced functions. If a user selects Scroll, Gestures, Device, or Settings from the pop-up menu, they will be presented with a second menu of options that have more advanced actions and settings for Switch Control. Those popup menus have all the feature options that a touch user would have.

Some of the features you can customize for scanners are:

I have not played with all the features and I am sure there are some additional good ones. Overall it is pretty good. Sometimes when it is looking for hot spots to scan, I did not understand the logic of how it grouped items but I think that would just need some playing with to figure out.

Overall a nice addition to iOS 7. In my testing, I used an Applicator switch interface and the new Piko extra durable switches from Finland.  In previous iOS's, switch interfaces piggy-backed on top of the Voice Over features designed for visually impaired users. With the new iOS 7 it looks like any Bluetooth switch interface for the iPad (including the coming soon Blue2™ switch shown in the video above) will be able to deliver a rich array of switch scanning features.

Showing new communication tools for close to two decades, I've heard plenty of "Oh Wow’s" from parents. But two fairly recent products at opposing ends of the cost, and the hi/low tech spectrum, have produced more jaw drops and exclamations of “this will change my child’s life!” than I've ever experienced before.

One is eye-gaze technology;  seeing your kid quickly, easily work a computer with a hi-tech camera system when previously, nothing else worked is incredible and often moving. 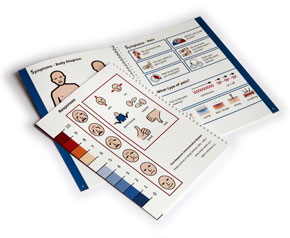 The inside and back cover of Widgit’s First Response Communication book.

The washable, durable medical communication book was designed for First Responders – ambulance crews, emergency room doctors, fire, police, etc.  The pages are so thoughtfully organized, that it is ideal for anybody who needs communication help in a medical scenario.

I was recently meeting with some parents of children on the autism spectrum who had experienced long hospital stays. They spent an hour recalling one procedure after another that should have been routine that turned into traumatic crises. Often, the root of the problem was mis-communication -- their children couldn't explain what they wanted or needed.  Just as common, the medical personnel couldn't convey what was going to happen and why.  The verdict of these parents was the same as what I’ve heard so many times before – The First Response Communication Book. would have solved so many problems.

Research presented at the 2013 Geneva Centre Autism symposium by researchers from Sickkids Toronto and Glenrose Hospital, Edmonton, (“Autism Comes to the Hospital: Experiences of Hospital Care from the Perspectives of Children and Adolescents with Autism Spectrum Disorders, Their Parents and Health Care Providers,” Muskat, Roberts and Zwaigenbaum, et. al.) summarized the communication challenges patients with autism face in a hospital whether they were verbal or non-verbal.

“... how frustrating it must be to be non-verbal and in pain somewhere in your body and you can’t tell someone...”

The researchers found that stressful and intimidating hospital environment  dramatically effected patients ability to not only be understood but to understand what was being communicated to them. They recorded how when patients felt intimidated and anxious because of the medical setting, they will  often give the impression that they understand the doctor or nurse even if they didn't at all.

The result of this chronic mis-communication was anything from confusion, anxiety, to behaviours that resulted in the use of restraints and sedation.

One parent at a conference described how difficult it was  for different nurses to understand that his son took needles in his right rather than his left arm.  “It was such a simple thing that would have made such a difference.  He could’ve just pointed to this picture here (gesturing at the Treatment section with the symbolized question “May I give you an injection...” in the First Response Communication Book), but instead ended-up in restraints. That’s a sort of unintentional torture.”

A page from the Widgit First Responders Communication Book.

Also responding to what doctors, nurses and any other caregivers try to communicate: The First Response Communication Book was recently purchased by the British Red Cross to go into every one of their ambulances.